I recently had the good luck to see a keynote by Neil deGrasse Tyson. It was a bit scattershot in the topics he touched on, which can always be fun. But, at one point during the talk, he briefly spoke about Pioneers 10 & 11 and Voyagers 1 & 2. Naturally, the discussion included the Pioneer plaques and the Voyager recordings. This is always exciting for me, as one of my tattoos is, in fact, the key to all four artifacts on those spacecraft. That key is the diagram above.

The idea arrived late, but Carl Sagan, Frank Drake, and a few others successfully convinced NASA that some kind of communication should be affixed to the Pioneer vessels, a message for whatever intelligence might, in who-knows-how-many years from now, one day find the spacecraft.

The longer you consider the challenge, the harder and harder it gets. Consider:

That last point is the real kicker: Another intelligence, completely separate from your own, is holding this thing. There is no shared language, no shared background. There is nothing interactive about this, no “miming” and pointing and waving your hands. You aren't there, not even a recording of you. Nothing happens in real time.

What do you say? Forget that problem. You've got a much bigger issue on your hands. For, whatever you choose to say, how can you say it?

Oh, and by the way: it's great that NASA has been convinced this is a good idea, and they've approved it. But Pioneer 10 is on a fixed launch schedule that cannot be delayed without tanking the mission; we can't delay these launches. Oversimplifying just a bit, the exact location of the planets at certain points in time is part of the spacecraft's mission. So, it's a great idea you've got there, but if you're going to make the launch, you've got to figure this all out in just three weeks.

That's what Sagan, Drake, and the team were facing. 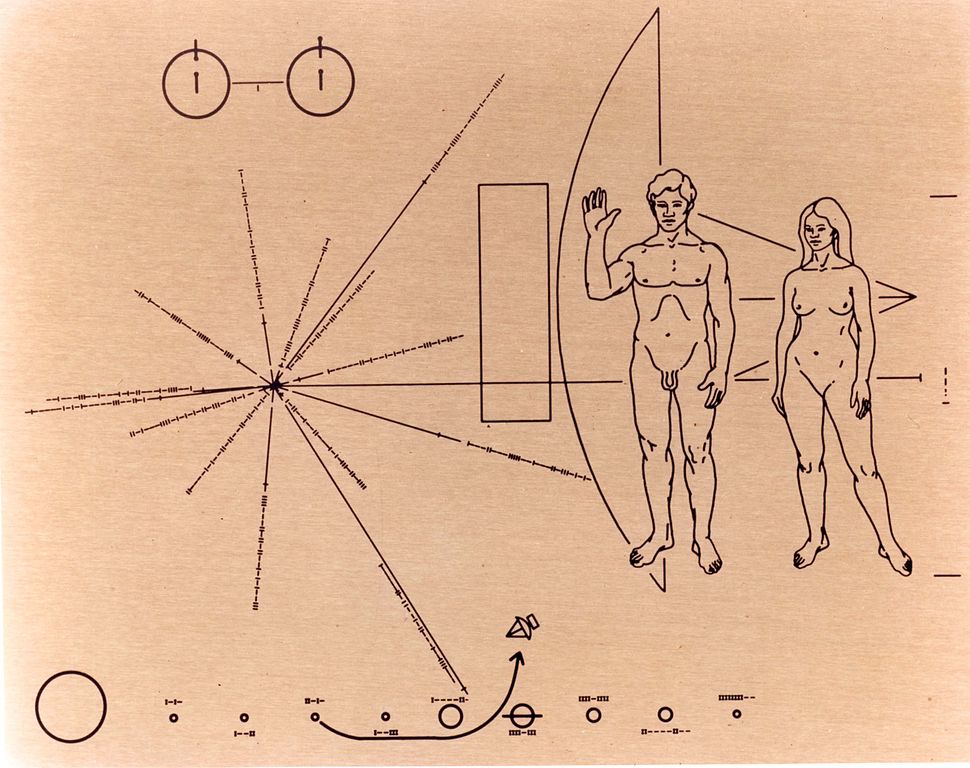 So, that's the image they came up with. It packs an awful lot of information into just a few diagrams, and there are many other writeups on the web that explain what they all are. I won't even try to do justice to the rest of the plaque, it's been said before and said better than I could.

However, if you look closely enough at the plaque, you'll realize there's a number system in use, and given enough time, you'd realize it's binary. It's a good idea: rather than assume some other intelligence have two hands with five fingers each like us, binary is pretty much the most basic number system you could use. But, what do those numbers count? What are your units? You could say “Hey, we're a bit over five and a half feet tall on average,” but what's a “foot?” Remember, no common language.

So let's focus on the upper left image, the “key” to the entire puzzle. It's the best part of the plaque, if you ask me.

There are a few very clever assumptions that went into the design of the diagrams on this plaque. One is about the nature of the civilization that recovers this spacecraft. Remember, this is never going to land somewhere. It can't land, it's uncontrolled. If, by some super improbable chance, it did get close enough to some far away planet, it would burn up and be destroyed on re-entry. Lacking an atmosphere, burning up wouldn't be a problem anymore... instead, it would simply smash into the planet at tens of thousands of miles per hour.

Think about it: what you've got here is an object about the size of a Volkswagen Beetle speeding away from us at more than 20,000 MPH. Given the vastness of the space it's moving in? It's barely a speck, a dot, an undetectable point silently racing through the heavens. Even we don't know quite where it is anymore, we just know roughly where it ought to be right about now. We can't find it, we certainly can't recover it, and we're the ones who built the thing!

Who knows how many decades of scientific and technical progress are needed before we could even attempt to safely capture this spacecraft. But that's exactly the clever assumption behind the plaque itself on the Pioneers and Voyagers. The thinking goes, if one of them is caught, it has to be a really advanced civilization that does so.

In particular, a civilization that operates in space. And therein is the hint that makes the key to the entire plaque work.

If an advanced civilization is able to capture, say, Pioneer 10, then you can safely assume that's a space-faring civilization. Now, if they're operating in space, you can assume that there are astronomers in that civilization. You can then further assume that at least some of those are radio astronomers; that is, astronomers who study that part of the spectrum from about a millimeter to a kilometer or more in wavelength. Believe me: in astronomy, for any wavelength of light, there's a bunch of people studying it.

Now there's a curious phenomena in radio astronomy. At a certain frequency, no matter where you look in the sky, and no matter when you look, there is a constant source of that particular light. It's everywhere, it's all the time, and it's been there since we first built detectors covering that wavelength. It'll also keep happening pretty much until the eventual heat death of the universe finally sets in. Sure, there's more of it coming from our galactic center, you could say it's “louder” if you like, but it's everywhere.

What is it? Well, if you took a single atom of hydrogen, and placed it far away in space somewhere where it can't be bothered by anything, where nothing interacts with it, and you leave it alone for a long time... at some random point in the future (but, on average, about a million years from now), that atom is going to kick out a single lone photon, in some random direction, just once, ever.

This is known as the “Hyperfine Transition of Atomic Hydrogen.” And it's one of many bits of evidence for modern cosmological theory, by the way. The fact that despite this being such a rare event in the lifetime of atomic hydrogen, and further, the sheer odds that of all the directions those photons get launched in, that enough of them are pointed at us... that, despite those odds, we are constantly seeing this light. It supports theories about the size of our galaxy and universe, as well as the nature of its contents. It's pretty fascinating what you can deduce from, essentially, static on the radio.

On point, though, it's an inescapable fact of radio astronomy. If you have a receiver sensitive to a hair over 21 centimeters, you'll find it easily enough. We humans detected it before we even figured out what it was. Eventually, after figuring out what it was, we even gave it a name: the 21 centimeter hydrogen line. Because astronomers are super creative like that.

But wait! If we can detect it... couldn't everyone else? Yes. This signal is a universal constant: it's going to be everywhere, and it's always going to be this kind of light. So, if we can detect it, so can the civilization that captured Pioneer 10. And if they study that figure long enough, they'll work out that it's defining | (a “one”) as the light emitted by those particular atoms of hydrogen. Remember that the number system is binary? So, we've got — (zero), | (one), and a unit of length.

Check that out! Without using a single bit of language, we've just established a way to measure the length of anything anywhere in the universe. Or, if you like, we've done it speaking only in terms of the universe and mathematics.

Now, we can take this one step farther. We're talking about light, and light has a wavelength. Another way of thinking about light is in terms of its frequency. At first, it seems like “six or half a dozen.” After all, consider the color “blue” is it 470 nm, or is it 638 THz? The answer is “yes.” They are both ways of referring to “blue.” One measures how far the photon can travel at the speed of light in a single vibration. The other number tells us how many times it vibrates in a single second. Both are “blue,” but one measures distance while the other measures time.

So, with this particular light, the 21 cm hydrogen line, we've also defined a frequency, just over 1420 MHz. In turn, that gives us a unit of time, about ¾ of a nanosecond. Now, we can discuss distances and times on the Pioneer 10 plaque, all defined via a universal constants that anyone can detect and measure themselves, anywhere in our observable universe. And we didn't trade a single “word” of language to do it.

Final reminder? Sagan and his team developed this scheme, from scratch, in a couple weeks.

So, is that why I carry this tattoo on my arm? Well... it's an impressive feat, there's no question of it. Just for the sheer creativity, to develop a scheme that allows us to describe ourselves and our solar system, to be able to draw a map using pulsars (think of them as cosmic lighthouses) to uniquely identify where we are, to provide directions on how to play a laserdisc encased with the spacecraft, to any civilization that captures these spacecraft... that alone is worthy.

Yet, it's not the real reason for my tattoo. It's too long to get into here, this post has gone on far too long already. But I'll leave this hint: for me, it's all about remembering to be an optimist. :-D

Performance and Types in Lisp

Some time ago, a few friends of mine encouraged me to write some posts about Lisp: why I enjoy…